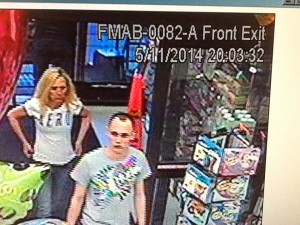 On 5/19/2014, Logan Township Investigators were contacted by Det. Sgt. Thomas Daniels of the Woolwich Township Police Department in reference to an alleged credit card theft that occurred at a business in Logan Township.  The victim, a resident of Woolwich Township, NJ stated that she believed that her credit card had been lost or stolen from a business in Logan Township and that it had subsequently been used fraudulently at several businesses in both Logan and Woolwich Township’s.  Investigators were able to retrieve receipts, video surveillance footage, and still photos from several of the business that showed a white male and white female suspect utilizing the cards to purchase goods valued in excess of $600.00.

On 5/20/2014, Logan Township and Woolwich Township Investigators sought the assistance of the public via facebook.com (www. Facebook.com/LoganTownshipPolice) in identifying the suspects.  Thanks to numerous phone calls and Facebook messages, the subjects were identified as Tyler Prorok (Age 21) and his mother, Melissa Prorok (Age 51), both of Logan Township, NJ.

***Presumption of innocence applies to all of those charged.